This page is a collection of common verses recited during Zen services.

All evil karma ever committed by me since of old,
Because of my beginningless greed, anger, and ignorance,
Born of my body, mouth, and consciousness,
Now I atone for it all. ø ø
ø Δ ø

(Bells only on third recitation)
ø Creations are numberless—I vow to free them.
Delusions are inexhaustible—
I vow to put an end to them.
ø Reality is boundless—I vow to perceive it.
ø The Enlightened Way is unsurpassable —
ø I vow to embody it. ø ø

Gatha on Opening the Sutra Δ

The Dharma, incomparably profound
And infi nitely subtle
Is rarely encountered
Even in millions of ages.
Now we see it,
Hear it,
Receive and maintain it.
May we completely realize
The Tathagata’s true meaning. ø ø 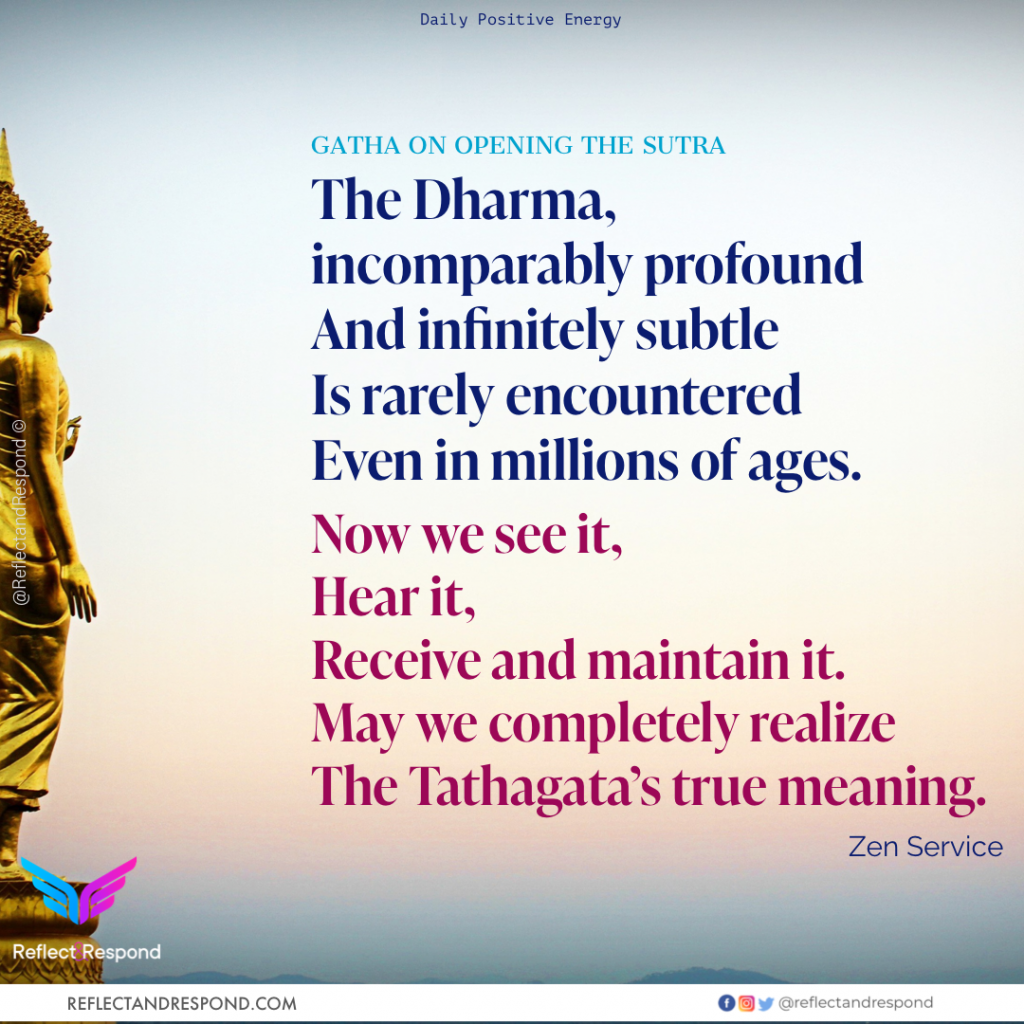 Verse of the Kesa 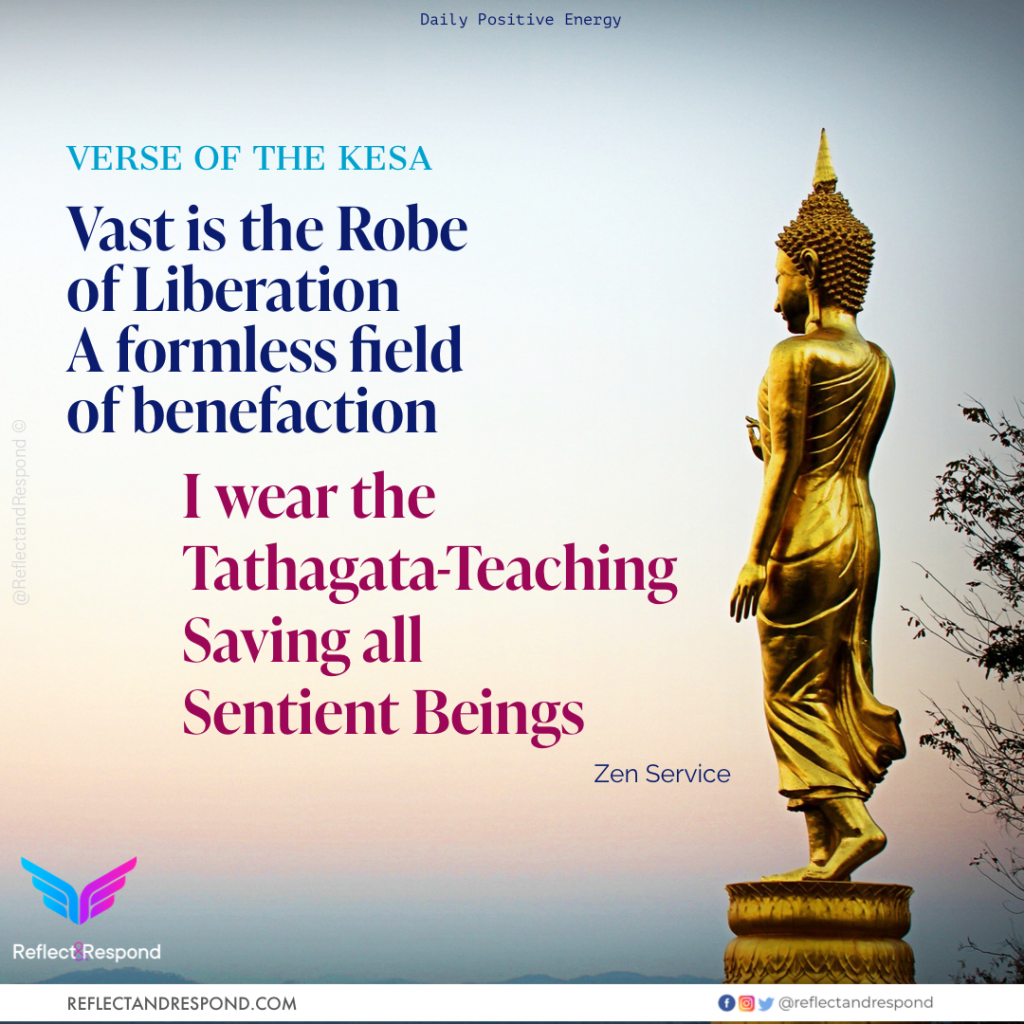 (Recite three times.
Bells third recitation.)
ø Atta Dipa
Viharatha
Atta Sharana
Ananna Sharana.
Dhamma Dipa
Dhamma Sharana
Ananna Sharana ø ø
Look within!
You are the Light itself.
Rely on yourself.
Do not rely on others.
The Dharma is the Light.
Rely on the Dharma.
Do not rely on anything,
Other than the Dharma. ø ø
All Buddhas throughout Space and Time ø
All Bodhisattva-Mahasattvas ø
Maha ø Prajña ø Paramita Δ 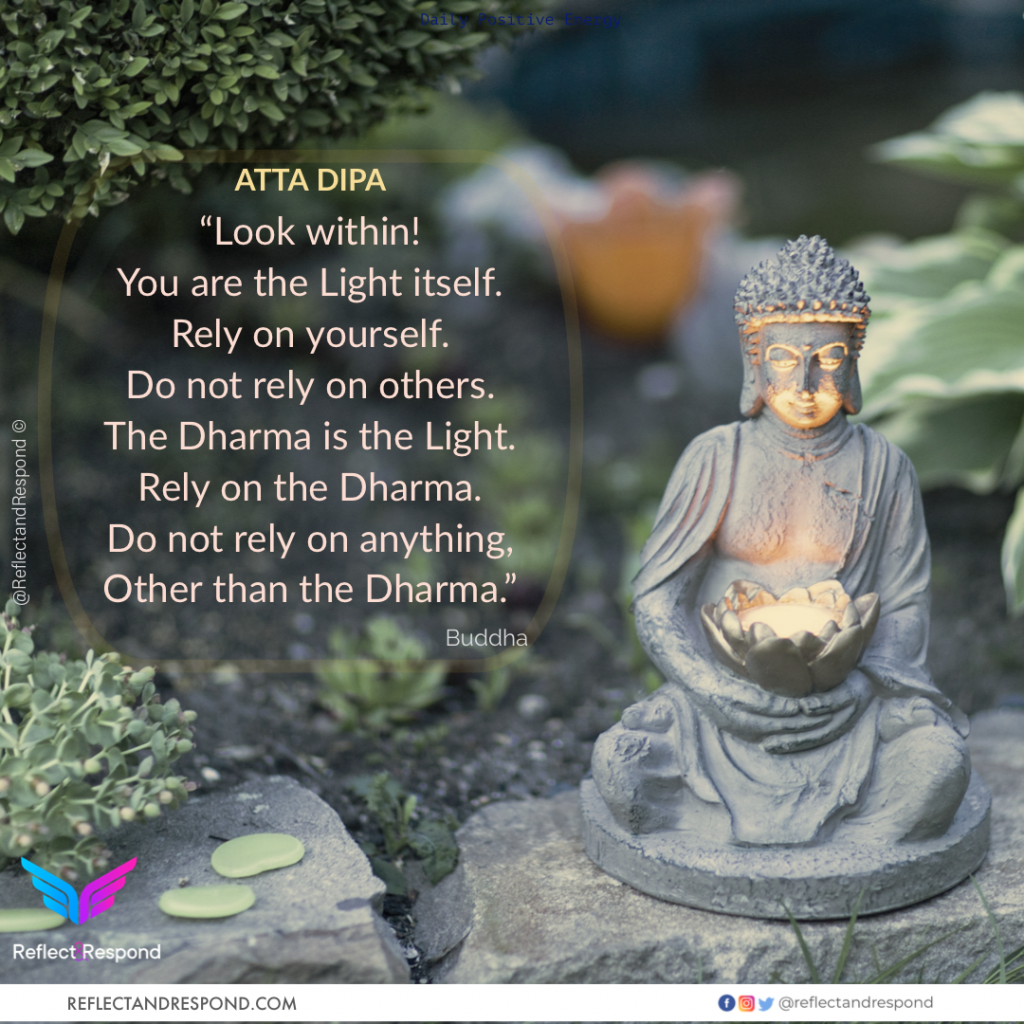 Not to do any evil, to attain good,
To purify one’s own mind;

This is the teaching of the Buddhas.
Not speaking against others, not harming others,
And restraint according to the Pratimoksha.

Moderation in eating, secluded dwelling,
And the practice of mindfulness;
This is the teaching of the Buddhas. Δ

When I, a student of Dharma,
Look at the real form of the universe,
All is the never-failing manifestation of the
Mysterious truth of Tathagata.

In any event, in any moment, and in any place,
None can be other than the marvelous revelation
of its glorious light.

ø This realization made our patriarchs
and virtuous Zen masters
Extend tender care, with a worshipping heart,
Even to such beings as beasts and birds.

This realization teaches us that our
daily food and drink,
Clothes and protections of life are the warm
flesh and blood.

The merciful incarnation of Buddha.
Who can be ungrateful or not respectful,
Even to senseless things, not to speak of Persons?
Even though they may be fools,
Be warm and compassionate toward them.

If by chance they should turn against us,
we should Bow down with humble words,
in the reverent belief

That they are the merciful avatar of Buddha,Who use devices to emancipate us
from sinful Karma
That has been produced and accumulated
upon ourselves

By our own egoistic delusion and attachment
Through the countless cycles of Kalpa.

ø Then in each moment’s fl ash of our thought
There will grow a lotus flower,
And each lotus flower will reveal a Buddha.

These Buddhas will glorify Sukhavati,
The Pure Land, every moment, everywhere.
• May we extend This mind

Over the whole universe
So that we and all beings together
• May attain maturity in Buddha’s wisdom. Δ

Wholeheartedly pay homage
To the ten thousand virtues of the absolute.
ø Shakyamuni Tathagata,
Buddha’s relics are Body and Mind.

Body-Mind is the Dharma Body
of Original Nature, Is the stupa of the Dharma realm.
We reverently bow.
• Buddha appears for my sake.
Buddha enters me and I enter Buddha.
Owing to Buddha we are maintaining it.

I attain enlightenment
And with Buddha’s miraculous powers
All creations are benefi ted
And raise the enlightened mind.
• Practice the Bodhisattva’s practice
And equally enter perfect Nirvana,
The great wisdom of equality.
Now! I respectfully bow. Δ 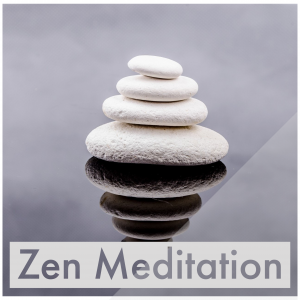 Zazen is a meditation technique & one of main practices of Zen. READ MORE

The title, “Dhammapada,” is a compound term composed of dhamma and pada, each word having a number of denotations and connotations. Generally, dhamma can refer to the Buddha’s “doctrine” or an “eternal truth” or “righteousness” or all “phenomena”; and, at its root, pada means “foot” and thus by extension, especially in this context, means either “path” or “verse” or both, English translations of this text’s title have used various combinations of these and related words.

The Dhammapada is the best known and most widely esteemed text in the Pali Tipitaka, the sacred scriptures of Theravada Buddhism. The work is in-cluded in the Khuddaka Nikaya (“Minor Collection”) of the Sutta Pitaka, but its popularity has raised it far above the single niche it occupies in the scriptures to the ranks of a world religious classic. Composed in the ancient Pali language, this slim anthology of verses constitutes a perfect compendium of the Buddha’s teaching, comprising between its covers all the essen-tial principles elaborated at length in the forty–odd volumes of the Pali Canon.According to the Theravada Buddhist tradition, each verse in the Dhammapada was originally spoken by the Buddha in response to a particular episode 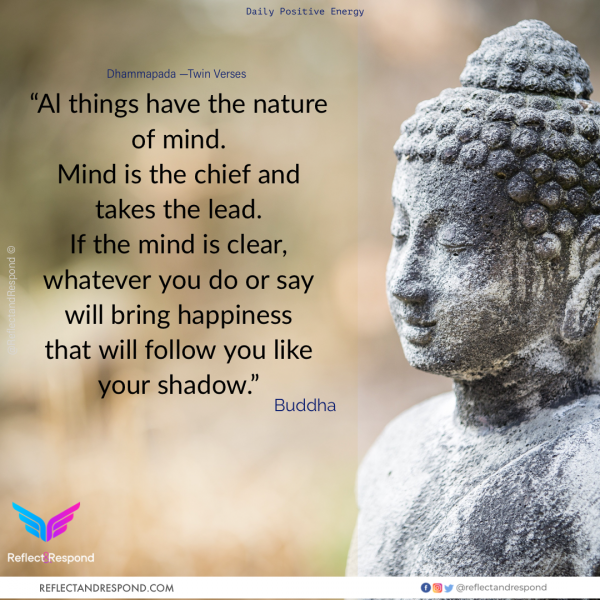 Twin Verses from the Dhammapada

Al things have the nature of mind.
Mind is the chief and takes the lead.

If the mind is clear, whatever you do or say
will bring happiness that will follow you like your shadow.

All things have the nature of mind.
Mind is the chief and takes the lead.

If the mind is polluted,
whatever you do or say leads to suffering
which will follow you, as a cart trails a horse.

Those who think in such a way
will never be released from their hatred.

Those who do not think in such a way
will be released from their hatred.

Your enemies will never make peace in the face of hatred—
it is the absence of hatred that leads to peace.

This is an eternal truth.

We are but guests visiting this world,
though most do not know this.

Those who see the real situation,
no longer feel inclined to quarrel.

Living for the pursuit of pleasure,
senses endlessly stimulated, all appetites fed,
undisciplined and lazy,

you will be blown away by Mara.
powerless, like a twig in a storm.

Aware of the unpleasant side of life, senses controlled
and appetites contained, full of faith and effort,
you are like a mountain of rock in a storm,
and Mara cannot touch you.

One who wraps oneself in the robes of a monk
without first clearing away his or her worst defilements
—one who lacks both self-restraint and truth,
is unworthy of the saffron robes.

One who holds tightly to self-discipline
and clears away all inner pollution,

one endowed with both discipline and truth,
is worthy of the saffron robes.

one is capable only of falsehood and fiction,
and will never arrive at true meaning.

one is capable of genuine understanding,
and will gain the heart of meaning.

Just as rain leaks into a house with a poorly-made roof,
desire and attachment will seep into a house
unprotected by meditative awareness.

Just as rain does not enter a house with a well-made roof,
desire and attachment do not enter
a house protected by meditative awareness.

how impure your actions have been,
you will suffer,  you will be tormented.

When you see how pure your actions have been,
you will be happy, you will rejoice.

The misery of your evil acts will plague you,
and fallen into lower realms, you will suffer even more.

Happy in this life, happy in the next;
the one who does good is happy in both.

The happiness from the good you have done will delight you,
and when you pass to the heaven realms,
your delight will continue to grow.

Though you can recite many words of the teachings,
if your words do not accord with your actions,
you are like one who counts the wealth of another,
and you are not to be numbered among the monks.

You are to be numbered among the monks
though you know little of philosophy—
if your actions accord with the dharma,
and you have renounced desire, hatred, and delusion,
if your mind is imbued with genuine wisdom,
and you cling to nothing in this world or the next. Δ

All Buddhas throughout Space and Time ø 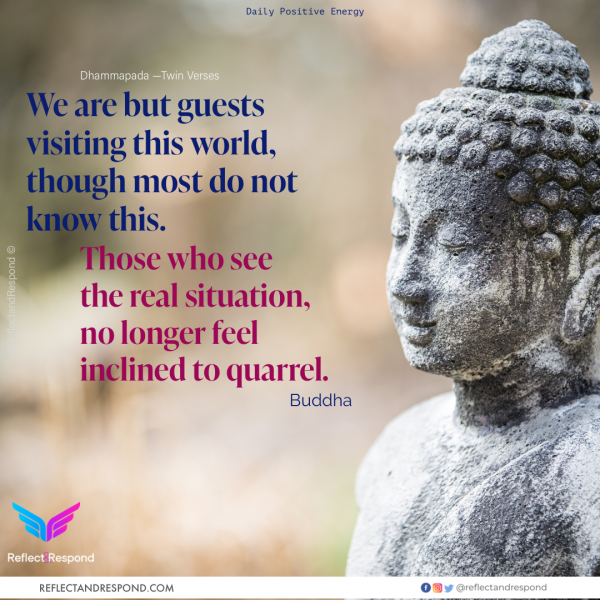