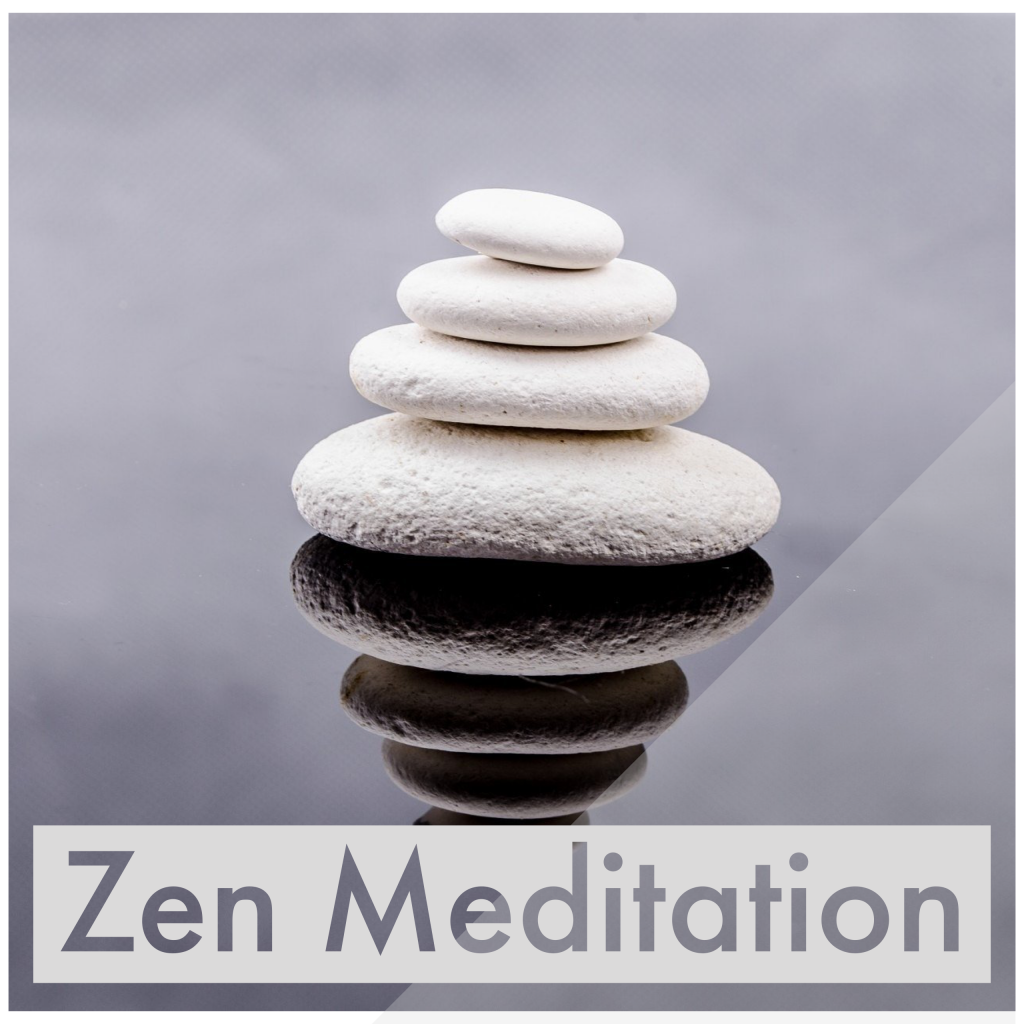 What is a KOAN?

“A koan is a surprising or paradoxical word or phrase, taken from an anecdote, that is used as an object of meditation in traditions descended from Chinese Chan Buddhism, like Japanese Zen. Contemplating these words is part of the training given by a teacher to help a Buddhist student to awaken.”

A kōan (公案) (/ˈkoʊæn, –ɑːn/; Chinese: 公案; pinyin: gōng’àn, [kʊ́ŋ ân]; Korean: 화두, hwadu; Vietnamese: công án) is a story, dialogue, question, or statement which is used in Zen practice to provoke the “great doubt” and to practice or test a student’s progress in Zen.

What is a ZEN Meditation?

Zazen is a meditation technique & one of main practices of Zen.

Through a form of meditation based on breathing, its called Zazen. It’s easy and anyone can do it. 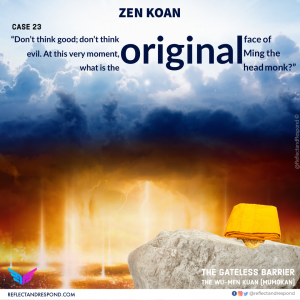 THE CASE The Sixth Ancestor was pursued by Ming the head monk as far as Ta-yü Peak. The teacher, seeing Ming coming, laid the robe and bowl on a rock and said, “This robe represents the Dharma. There should be no fighting over it. You may take it back with you.” Ming tried to lift it up, but it was as immovable as a mountain. 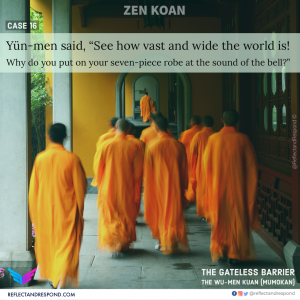 Zen Koan Case 16: Yun-men: The sound of the Bell

THE CASE Yün-men said, “See how vast and wide the world is! Why do you put on your seven-piece robe at the sound of the bell?” WU-MEN’S COMMENT All you Zen students, training in the Way, don’t be victimized by sounds; don’t follow up on forms. You may have realization on hearing a sound or enlightenment on seeing a form—that’s natural. But don’t you know 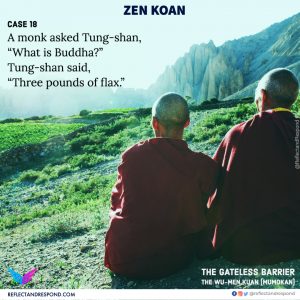 Zen Koan Case 18 What is Buddha?

THE CASE A monk asked Tung-shan, “What is Buddha?” Tung-shan said, “Three pounds of flax.” WU-MEN’S COMMENT Old Man Tung-shan attained something of clam-Zen. He opened the two halves of his shell a bit and exposed his liver and intestines. Be that as it may, tell me: where do you see Tung-shan? WU-MEN’S VERSE Thrusting forth “three pounds of flax!” The words are intimate, mind 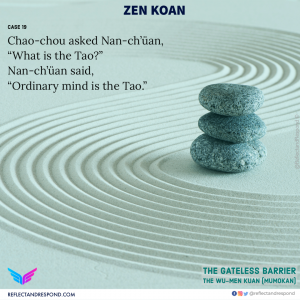 “What is the sound of one hand?”

“Nan-in, a Japanese master during the Meiji era (1868-1912), received a university professor who came to inquire about Zen.

Nan-in served tea. He poured his visitor’s cup full, and then kept on pouring.

The professor watched the overflow until he no longer could restrain himself. “It is overfull. No more will go in!”

“Like this cup,” Nan-in said, “you are full of your own opinions and speculations. How can I show you Zen unless you first empty your cup?”

“What was your face before your parents were born?”

Below are from The Gateless Barrier which is generally acknowledged to be the fundamental koan collection in the literature of Zen.

A monk asked Chao-chou,
“Has the dog Buddha nature or not?”
Chao-chou said, “Mu.”

Not falling into cause and effect can bring the wild fox to life; not obscuring cause and effect kills him stone dead. If you still don’t understand why don’t you go to the foot of the north cliff and take a look at him. Trans. by Norman Waddell After the meal, Pai-chang led the monks to the foot of a rock on the far side of the mountain. And there, with his staff, he poked out the body of a dead fox. He then performed the ceremony of cremation. That evening he took the high seat before his assembly and told the monks the whole story. Huang-po stepped forward and said, “As you say, the old man missed the turning word and was reborn as a fox five hundred times. What if he had given the right answer each time he was asked a question—what would have happened then?” Pai-chang said, “Just step up here closer, and I’ll tell you.” Huang-po went up to Pai-chang and slapped him in the face. Pai-chang clapped his hands and laughed, saying, “I thought the Barbarian had a red beard, but here is a red-bearded Barbarian.” WU-MEN’S COMMENT “Not falling under the law of cause and effect.” Why should this prompt five hundred lives as a fox? “Not evading the law of cause and effect.” Why should this prompt a return to human life? If you have the single eye of realization, you will appreciate how old Pai-chang lived five hundred lives as a fox as lives of grace. WU-MEN’S VERSE Not falling, not evading— two faces of the same die. Not evading, not falling— a thousand mistakes, ten thousand mistakes.

Whenever Chü-chih was asked a question, he simply raised one finger.

One day a visitor asked Chü-chih’s attendant what …

THE CASE Huo-an asked, “Why has the Western Barbarian no beard?”

The Gateless Barrier is generally acknowledged to be the fundamental koan collection in the literature of Zen.

Gathered together by Wu-men (Mumon), a thirteenth-century master of the Lin-chi (Rinzai) school, it is composed of forty-eight koans, or cases, each accompanied by a brief comment and poem by Wu-men.

Robert Aitken, one of the premier American Zen masters, has translated Wu-men’s text, supplementing the original with his own commentary — the first such commentary by a Western master — making the profound truths of Zen Buddhism accessible to serious contemporary students and relevant to current social concerns.